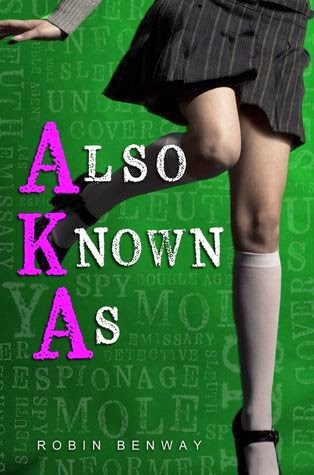 I bought this book when it was on sale for the nook and finally read it because Robin was coming to my city for a signing.  Although I had heard of her other books I have not read and do not own any of them, but have heard good things.  I'm not entirely sure what I was expecting when I started this, but what I found in the end was a cute, spunky novel about a teenage spy and the complications that arise when she goes on her first solo mission.  It was your average run of the mill girl meets boy, they fall for each other story, and although the romance happened a little too fast for my liking that's not necessarily a bad thing.  All of the characters in the novel were fun though, they were colorful and stood out so it was no problem for me to identify which one was being talked about, which is sometimes a problem in some of the novels I read.  My favorite character was probably Roux, but that's just because she was so quirky.  I could see myself hanging out with her and Maggie.  Overall the plot was fast-paced and the book itself was a quick, easy read.  I would almost place it in the lower YA age-range except for the fact that there was some heavy drinking and a few swearwords dropped here and there, but then again what kid hasn't been exposed to swear words and characters (or family/friends) drinking in some aspect of their life?  As a whole the novel was a fun, light read that was entertaining enough to hold my attention as well as get a few laughs out of me.  Seeing as I have the second book in my possession now I hope to get to it sooner rather than later, and I think I might give this one to my younger cousin to read because it's something she might end up enjoying herself.  Although I've not read Ally Carter's series I think fans of those books would also enjoy these ones because they're similar, if not possibly lighter (at least lighter than the later ones from what I've heard).  I will be interested to see where Robin takes the characters in book two, and I don't think I would object to seeing a third and a forth book published (which Robin says she has ideas for).