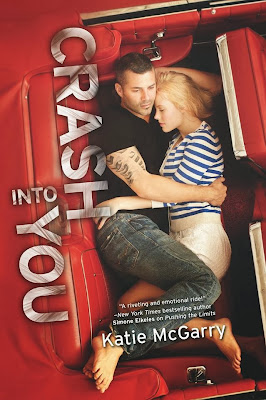 Just last year a crazy talented writer came onto the scene with her debut contemporary novel Pushing the Limits and there is no doubt in my mind that since that no matter what she writes (it could be mutated bunnies killing the bee population and dooming the world) I will read it.  When I asked for an ARC of this book and it showed up in the mail I basically freaked out.  Katie has always somewhat pushed the limits (pardon the pun) when it comes to what she puts her characters though, they experience REAL danger and REAL problems.  I have to say that in this book she NAILED the real problems, and she took one that is so overlooked and made it a huge part of the story.  The main female character, Rachel, suffers from anxiety/panic attacks and for me this was HUGE because it's SO underrepresented when it comes to literature and television.  We talk about depression all the time now, but anxiety is basically the other side of the depression coin, and it makes me sad that it's never talked about.  Katie does such a great job at making it real and serious, which is something so many people just don't understand.  On the flip side Katie also sprinkles the book with those swoony moments that she's become famous for in her books.  If it's possible I think she's made NOT kissing even sexier than *cough* other things *cough*.  In this book we really get to look into Isaiah's life and see so much more of him than we did in the first two books in the series.  He grows SO much in this book and I just love it.  BOTH of the characters grow, and we meet some really great new characters too.  We've seen the three main characters from Pushing the Limits find someone they love and next year we get to see a new character get a shot at a happy ending, but I wouldn't object to seeing a few more characters from this book get their shot as well.  Maybe if we all love them enough Katie will give them a shot.  Regardless of what ends up happening I'll be happy with anything Katie gets to write/publish, and should she stop with four books in the series I'll still be elated because she's already slated for another series to hit shelves next year.

*Thanks to Harlequin Teen for providing me with an ARC of this book in return for an honest review.
Posted by Anna at 7:00 AM No comments:

In Which I Talk About NaNoWriMo 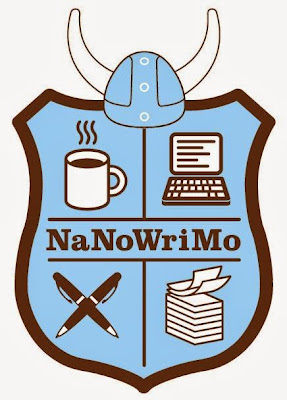 Unless you've had your head stuck under a rock for the past few years you've probably heard of something called "NaNoWriMo" or "National Novel Writing Month".  If you don't know what it is let me explain, basically it's when you write a novel (50,000 words) in a month (November 1-30).  Every year thousands of people sign up and try to knock out a novel in thirty days.  My friend has been doing it for quite a few years and this year I decided I was going to give it a shot too!  This means that I might not be around a ton in the upcoming month.  50,000 words in thirty days is quite a few, and I really have no idea if I'm actually going to finish (well, actually it's called winning) but I'm gonna try my darnedest to do so.  I hope that I'll still have time to read as well, but with homework and college classes I really can't promise anything.  Maybe this book might even turn into something more, but first I'll have to actually write it.
If you've decided to take up the challenge too then let me know and we can hopefully all write (or procrastinate) together, and it not maybe take the month of November to celebrate some authors who got their start as NaNo authors!  Cinder by Marissa Meyer and The Night Circus by Erin Morgenstern are both NaNo novels that were published and are HUGE hits!
Wish me luck and if you are embarking on this journey too I wish you luck as well!
Posted by Anna at 6:44 PM No comments: 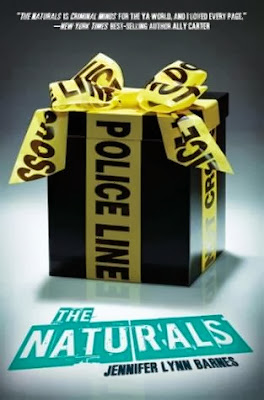 If you know anything about me then you know that I'm a fan of all of those crime shows on TV.  CSI, NCIS, Law and Order, Criminal Minds, you name it I've probably seen at least one episode.  For years I've been fascinated by the intricate workings of the psychopathic mind so when I heard about a book that revolved around a girl that can profile and then goes to work for the FBI I was hooked.  Recently I had been in a reading slump and I decided to jump ahead a little and start a book that I was almost positive would catch my attention, and I was right.  I was sucked into this story from page one, the research that Barnes must have done had to be extensive and the parts from the killer's POV just filled me with glee.  If there's one thing I love it's reading a book where you get to look into the killer's thought process, and you get to do that numerous times in the book.  The whole plot was a lot like a teenage version of Criminal Minds, although it was kept more PG vs the TV MA because it's for teenagers.  Would I have liked a little more blood?  Yeah, I'm not gonna lie, that would have been nice, but this isn't a slasher novel, it's about science, or well, depending on who you talk to it's science.  And the ending surprised me!  Well, who the killer was surprised me.  Basically I just adored this novel, and I'm really happy to find that it's going to be the first in at LEAST a two book series.  Criminal Minds and Lie to Me fans will eat this book up, along with fans of one of my all-time favorite book series The Body Finder by Kimberly Derting.  It has that same spooky feel without the paranormal element to it, which in a way makes it all the more real.  Hopefully book two comes out sooner rather than later because although the ending is tied up there are lose strings floating around that I want to see tied up, and of course there needs to be more killers.  I also hope that the books do well and Barnes will decided/be contracted to write more than two, because I would love to see more of these books out there to enjoy, even it's just me that reads them.

*Thanks to Disney-Hyperion for providing me with an ARC of this book in return for an honest review
Posted by Anna at 10:11 PM No comments: