Review-I'll Give You The Sun 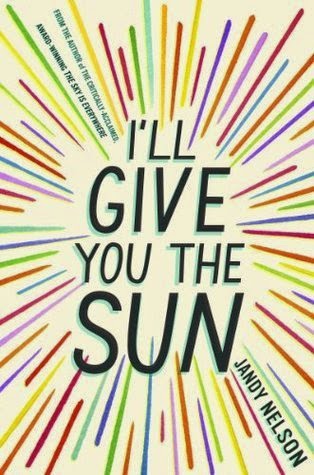 Three years ago I read Jandy Nelson's debut novel, The Sky Is Everywhere, and ever since then I've been eagerly anticipating her next novel.  To begin with I'll admit I wasn't as blown away as I thought I would be but I kept on reading and soon was swept up in a flurry of beautiful writing and a story unlike anything I had ever read.  The story itself, one that's told from the POV of two twins, a boy and a girl, and each POV taking place 3 years apart, was a strange way to format the book and in all honesty there are probably very few people who could actually pull something that like off, but Nelson is one of those people and she does it stunningly.  It's even more amazing that she's able to twine the stories of these two siblings together in such a way that I've really only ever seen in fantasy novels, but somehow it manages to work in this contemporary one.  This helps bring a sense of magical realism to the story.  Surprisingly I ended up liking the male twin's POV better than the female's.  The pages where Noah was narrating just seemed more raw and real to me; the romance he experiences more passionate and swoon-worthy.  I wouldn't have minded a whole novel from his POV and would be thrilled to see pieces of the sister's story (at age 16) from his POV as well, but I doubt that will happen.  Overall I don't think I could have been more pleased with how this book turned out, and despite the fact that it started off a little slow and took over three years to come out I can't seem to find it in myself to care.  I think the fact that it took me several weeks to actually formulate my thoughts into a review shows how amazing I think this book is.  I'm also pretty sure that no matter how long it takes Jandy to write her next book I will read it, I don't actually think I'll care what it's about either.  If you haven't read anything by Nelson yet I highly recommend you at least pick up her debut novel The Sky is Everywhere, which is out in PB now, and if you have read that one pick up this book right away.

*Thanks to Penguin for providing me with an ARC of this book in return for an honest (and in this case super late posted) review.
Posted by Anna at 3:15 PM