Review-The Beginning of Everything 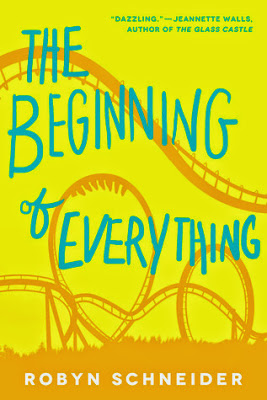 You know when you read a book and the entire time you find yourself nodding along because you know what it's like to BE the main character?  Okay, maybe you don't have a werewolf boyfriend or have someone trying to suck out your soul, or in this case, have a shattered knee that changed the course you thought your life would follow, but I connected with Ezra.  Sometimes you connect with a character because you're a teenage girl, or you were the one who got left out when all the good things happened, but to me the connection was deeper than that.  First let me say that this book, this is a book that I would write (minus all of the obscure literary references, because despite the fact that I'm a blogger I really don't have a soft spot for the classics and poetry. In fact, I kind of despite both. The thought of having to read them in high school made me cringe. Literally.) but all of the obscure little facts and pop-culture references? And the overall story ARC? Yup, that's how I envision my book going...should I ever actually get it on the page.  Every now and then you come across a book that, despite the fact that it's somewhat of an oddball, speaks to you on a some spiritual level (no, not religious, something DEEPER than that) and you end up wishing you wrote in your books so you could highlight all of the little passages that you just adored.  This, for me, was one of those books.  The fact that Robyn decided to write from a boy's POV and that she did some things that, let's be honest, in YA literature just don't happen all that often, all of those things just made the book that much better.  Honest truth right here though, this book won't be for everyone.  I can guarantee some of you are going to dislike it, maybe even hate it, and I wish I could say something like "if you liked x you should give it a shot, but if not maybe you should pass it up" but I can't say that because I'm almost positive this is going to be one of those books that resonates with some and falls flat with others, but unless you try it yourself you won't know which group you fall into.  As a blanket recommendation though I'm going to say go for it, pick up the book and read a few chapters, because it gave me that fuzzy feeling that maybe everything I want in my life could actually happen, or at least that I can go for my dreams.

*Thanks to Harper Teen for providing me with an ARC of this book in return for an honest review.
Posted by Anna at 9:24 PM