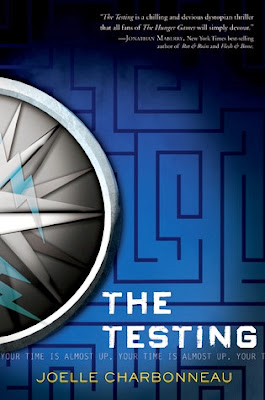 I'm pretty sure that at this moment in time dystopian is the new vampire, so it doesn't surprise me that the range of topics covered in them go from asteroids to zombies.  I have to admit that the one thing that I didn't think could fit into a dystopian novel was school, but Charbonneau proved me wrong.  Now that I think about it it makes sense, school is already a competition, but GENERALLY not a deadly one.  The novel combined a Hunger Games type of base and then added your basic dystopian elements (seemingly perfect government, secret rebel groups, things not being what they appear to be, ect), and ended with a dose of creep-tastic SAT-like exams.  Recently I was talking with a bookseller about flawed characters, and I think that this one shows a good example of one who is flawed, but she's flawed in a good way.  Reminding me in more than one way of Katniss it was her kindness and honesty that earned her my respect, because in a world where it's kill or be killed some take that to the extreme and go off the deep end.  I think it helps us keep hope that despite all of the evil in the world there is also good, because without that where would we be?  One of the most interesting things about this novel, not counting the whole killer test thing, was that the cause of the broken world was very thought out.  It had seven stages, four that were man made and three that were geological, which I thought was ingenious, because I have very little doubt that should the world come to an end leaving only a handful of people left will be not because of some alien invasion or killer creatures, but from something of our own making, but that doesn't mean that however we ruin things the Earth won't try and help.  Although the book doesn't end on a huge cliffhanger, in fact, I saw it coming from a mile away, I'm glad I have an ARC of the second book that I can dive right into.  I can't wait to see what comes next in the series, and in the future I hope to see more work of hers.