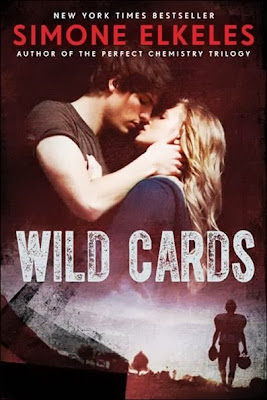 A few years ago I stumbled upon Simone's Perfect Chemistry series and fell in love, there's pretty much no other way to describe it.  Her characters have real problems, which make them seem more like real people who just happen to have a book written about them (like when Pheobe in Friends writes a book about everyone else and basically just writes whatever they do and say).  That and Simone write some pretty sexy guys.  I'm not entirely sure guys like Derek (or Alex, or Carlos, or Luis) exist in the real world, but if they do, until I find one for myself I'll have to settle for reading about them.  Derek is a classic Simone boy, he's hot, he's slightly broken, and he's got a snarky attitude to hide the pain.  This book actually reminds me a lot of Catching Jordan by Miranda Kenneally, because the main female character plays football on a high school team.  It's actually one of the things I love about the book.  Sometimes in YA fiction teenage girls are fluffy and, unfortunately weak, but that's not the case with Ashtyn.  She's spunky, she's fierce, and despite everything she fights for what she wants, even if everyone else says that she shouldn't have it.  I loved the dual POV, and the romance was super steamy.  I honestly believe that no matter what happens in a book there should be some times when you can't help but laugh, be that through snark or butt jokes I don't care, but it needs to be there because no matter what there's always that one person that makes life funny despite the possible crappy time you're having.  There was something I just can't put my finger on that makes this book slightly less than five stars, but I would highly recommend it. Fans of Suzanne's previous work will eat it up, along with fans of Miranda Kenneally, fans of football (probably girl fans though), fans of contemporary books, and fans of shmexy boys (but that's all of us now, isn't it?).  I can't wait to see what happens in the next book in the series, although I think it will be a companion set in the same city but with different main characters.  At this point I'm basically addicted to anything that Simone writes, and I hope that she will keep writing for an extremely long time.

*Thanks to Bloomsbury/Walker for providing me with an e-ARC of this book in return for an honest review
Posted by Anna at 7:00 AM