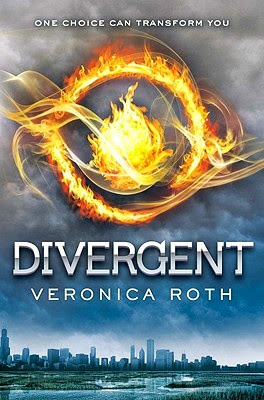 I found an ARC copy of this book at my school library before it came out and I decided that it looked pretty good, so I took it and put it on my TBR pile.  It sat there, and sat there, and I bought a finished hardcover, and then I gave my ARC away to someone less fortunate than me, and I regret that EVERY DAY.  By the time book three had a title and a cover I had pretty much decided I would wait until the it came out and read all three books at once, but I started reading this book in a store and, well, you  know how that goes.  People have raved about this book since day one, and I've heard just about nothing but praise about it from everyone who has read it, which is a good thing, but it can also cause a problem.  If everyone tells you that this is "the best book they've read in a long time" you're going to hold it to pretty high expectations, and I did.  Thankfully I wasn't let down too much.  The world was fascinating and the idea of factions was a nice twist in regards to other dystopian novels.  Reading about the characters was so much fun, and I found my heart beating faster when the action ramped up, which I think takes talent.  Veronica has oodles of that, and the fact that this is her debut novel makes it even more amazing.  the one thing that I was unhappy with was the fact that, being a dystopian novel, I expected something to be wrong with the government, but it took a lot of time to get to that part.  I'm not saying that it wasn't there, because it was, but there was still a big part of me that went "where's the corrupt government the main character will have to bring down?  I'm halfway through the book and it's not there."  There were moments when I wanted to poke the book and go "where are you hiding the evil government!?"  All of this being said I really enjoyed the book, and I'm very glad that I can jump right into book two without having to wait an entire year.  I'm interested to see what happens next, and where Tris and Four, and although most of the "surprise" moments didn't catch me off guard because of the Internet I was still flipping pages to see what it all meant, who was who, and where it all would end up.  And yes, I did make a list of the factions with what they stand for because with such weird names I got confused, but I think I have it down now...I think.