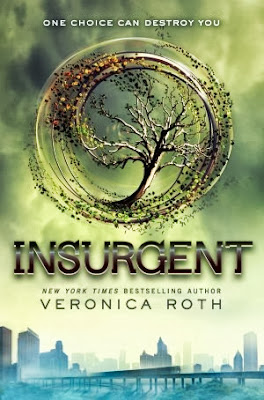 Whenever I read a sequel I find that I have more trouble reading it than I did the first book, and that's probably because of two reasons.  One, after reading book one I'm expecting something, and there's a good chance the book WON'T live up to the first one.  Two, I've pretty much decided that second books are meant to tear your heart to pieces.  Having said all of that I wasn't really worried about the first thing, because I'd heard from everyone that this book was even better than book one, and in regards to the second thing, well, Veronica already played chicken with your emotions in the first one, so it's wasn't hard to figure out she would do it in this one as well.  The fact that it took so long for the action to start in book one turned me off a little bit, and despite the fact that the end of Divergent left you expecting action right away in the next book it wasn't exactly like that.  Sure, there was action in the book, and I loved the fact that we got to see deeper into other factions and met more characters that were Divergent, but there were moments when I cringed.  Tris is a great character, she's smart and resourceful, and I really enjoy seeing Four any time he decides to show up.  Personally I think they make a really good team, but there were some times in this book when I just had to go "you're both being SUPER stupid, just, come on, stop that."  But of course they're fictional and have already been written, so they can't.  All in all I was again pretty pleased with the outcome of this book, although like it's predecessor there's just something that makes it just miss that 5 star rating, although I can't put my finger on it exactly.  This time the spoilers that I encountered around the Internet were pretty minimal, so there were some surprises that I didn't see coming and caught me slightly off guard, although I did find myself somewhat emotionally detached from all of the characters in this series, just kind of watching as an outsider, like I was watching a movie (although that very well could have just been me).  Based on what everyone said I was also expecting a cliffhanger of epic proportions (think Delirium by Lauren Oliver), but what I found was more along the lines of The Testing.  You knew the book had to end somewhere because, well, it's not the last book in a series, and it sets us up for whatever comes next, but it doesn't make you wonder if your book is missing pages, which is what I was expecting based on how everyone else reacted.  I will be reading the last book to see how it all wraps up, and with the trailer for the first movie just having debuted I'm sure I'll be watching the movie as well, because, well, let's face it, it can't be as bad as the Eragon.  Basically I'm right up there with the other fans waiting for everything to come out, although I might not be as...rabid.