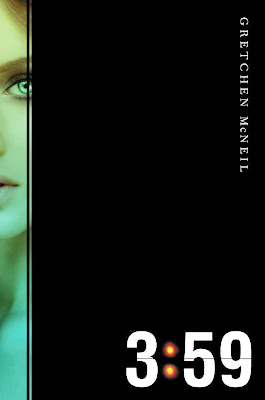 I read an early copy of Gretchen's debut novel Possess and while I enjoyed it I didn't love it to death, but then she wrote her sophomore novel Ten and by golly did I just eat it up.  For quite a few years now I've been a huge fan of the horror genre, but horror and YA don't really mix because...well, if you scare the crap out of kids people [parents] might get kinda mad.  When I heard about this book I was super excited because it was Gretchen McNeil (so a horror book), and it had SCIENCE in it!  Yes, this book has science in it, and however loose it might be there is still science, so beware, it's not a teen slasher book (see Ten).  This book started out as a more mellow sci-fi book, and I was like "I like it, but why does the T-shirt I got to show around say 'be afraid of the dark', that's kinda horror-y" and then it got to that part and I was like "oh crap!".  There aren't a ton of sci-fi books out there for the YA age range, and when I come across one it's really fun to see what aspect of the sci-fi genre the author chose to write about, and in this book it was the multi-universe theory.  I've only read one other book within the YA age range that deals with multiple universes, so the fact that I found another one that was also well done and had a horror-y edge to it pleased me a great deal.  The creatures that were in the dark reminded me of the Vulcra from Leigh Bardugo's Shadow and Bone, which I found to be super cool. although these were more science based as opposed to magic-y based.  Props for that Gretchen.  There was that fun "who's the bad guy" thing going on in the book, and amazingly there's romance in there too (only Gretchen can work romance and killing into the same book).  The ending is open-ended enough that I could see a sequel happening, whether or not that's in the future I don't know, but I know I would enjoy coming back to the world and would not object to it.  I really enjoyed this novel and think that sci-fi fans, probably more so those of The X Files and Fringe, will find this book really entertaining.  Whatever Gretchen is up to next, bring it on.  Just be warned that there is science (possible pseudo-science.  Well, yes pseudo-science seeing as none of it can be confirmed) so you'll have to pay attention to some parts and possibly understand basic physics and whatnot or you might end up skimming over those sections with a look on your face like this "o.O".

*Thanks to Harper Teen for providing me with an ARC in exchange for an honest review.
Posted by Anna at 9:38 PM